A Roxbury House that Helps You Breathe 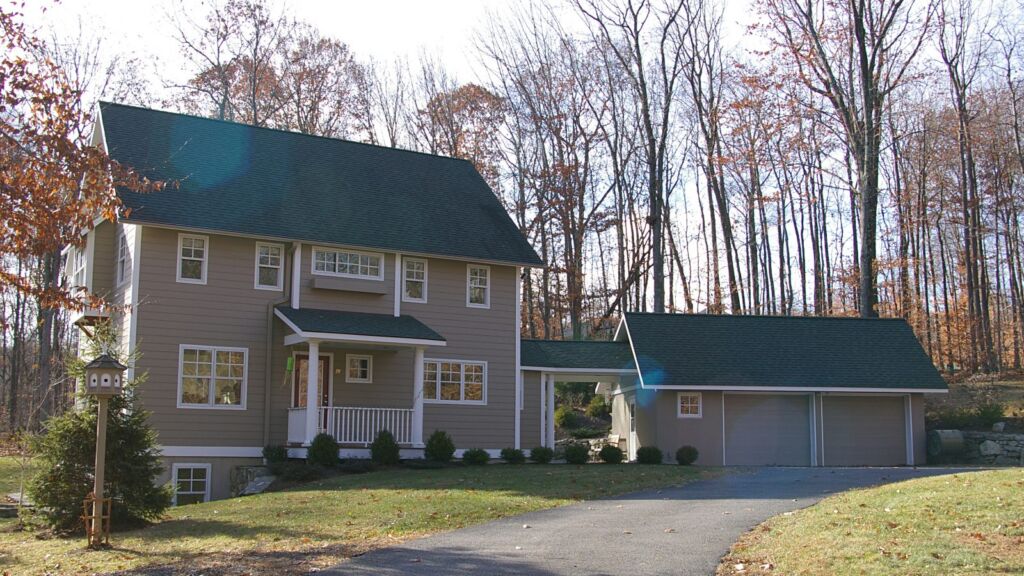 A Roxbury House that Helps You Breathe

Reprinted with the permission of The Litchfield County Times.

In colonial America, settlers closed their houses tightly against the night air, convinced that unhealthy ‘humors’ were carried on the evening breeze. Today, the situation is reversed, according to Michael Trolle, a general contractor currently completing Connecticut’s first “Health House’ on wooded Transylvania Road in Roxbury.

Airborne indoor contaminants are present inside modern homes in levels from two to 100 times higher than outdoors, according to Mr. Trolle. And, he continues, there is evidence that those contaminants are contributing to increasing numbers of cases of asthma and other respiratory illnesses, especially among children.

Mr. Trolle explained that modern appliances that release carbon monoxide; volatile organic compounds such as formaldehyde, benzene and perchloroethylene emitted by building materials, furniture and rugs; radon, and biologic agents such as molds, dust mites and pet dander all contribute to the unhealthy air found in most homes today.

The solution he proposes for the unhealthy stew found in most modem homes is much the same as that used by the Colonists: Seal the house up tighter-but with crucial differences. Mr. Trolle’s new Health House is built with materials that are both environmentally friendly and designed to reduce contaminants, and he has installed a state-of-the-art ventilation system that provides an even flow of fresh air 24 hours a day.

His execution of that first environmentally engineered house has been so careful it passed the stringent standards of the American Lung Association – as verified by Conservation Services Group of Westboro, Mass. a third-party consultant – and has been officially recognized as a Health House, the first in Connecticut and the Greater New York area. It becomes one of only about 500 houses so designated in the country. Mark LaLiberte, president of Shelter Sources in Lakeville, Minn., who is charged with assessing Health House test results, concluded Mr. Trolle’s creation exceeded requirements in every respect.

Such a conclusion is not surprising, considering the care the general contractor brought to the project. “I could accomplish the goals of good building science and spend no more than 5 percent more than you would for normal construction,” he said, “but I wanted this building to be really exceptional.”

Mr. Trolle is ready to market the house, which sits on a six-acre wooded lot, for $385,000. “You could get more living space for your dollar,” he conceded, but on a tour of the 2,700-square-foot building he detailed why he feels this particular house is worth the investment. It is the result of a carefully thought-out design and state-of-the-art construction. It is also his first venture into building science.

He explained that he had started his working career as an English teacher, but then shifted to the real-estate industry, putting together lease packages for office space in Stamford. “Then, three or four years ago, I had kind of a mid-life crisis, ” he said. “I cast about for something else to do. I had always been interested in construction and design, but I was not sure that the construction that was taking place would be something I wanted to do. Then, I learned about building science on the internet. I found there was a lot going on and that it was not just a few oddballs that are advocating it. It is a mystery why the trade has not embraced this new science.”

Eventually, after two years of study, Mr. Trolle determined that the Lung Association’s Health House program offered the standards most compatible with what he wished to achieve. “Not only does it give you the best air quality, but you also end up with a house that fulfills an environmental agenda of being more durable, low-maintenance, energy-efficient and comfortable,” he asserted. “I was optimistic that I could build a house right, on a somewhat smaller scale, and still keep it reasonably affordable.” He formed his own firm, Homes for Health and Environment, last fall and began construction on the first parcel of a 21.5-acre tract he had purchased in Roxbury.

“The first thing you need is a house that is dry from the ground up,” he, said. To achieve that, he started with a 12-inch bed of crushed stone, over which was installed two inches of insulation and a four-inch reinforced concrete slab. A passive depressurization system of PVC piping was installed to prevent radon infiltration into the contained space.

Atop that base, a pre-cast concrete foundation was installed. The concrete stud walls that form the foundation are made of 5000 PSI concrete and are extremely strong and waterproof. The foundation was insulated with one-inch rigid insulation. “The pre-cast walls use much less concrete than poured foundations, and the walls went up in only five hours,” Mr. Trolle said.

The exterior concrete walls of the garage were left unfinished, giving “an interesting stucco effect,” according to the builder. He also noted that the garage has been detached from the main house, to eliminate any infiltration of combustion fumes into the living space.

The main house has walls nine-and-one-half inches thick, which have been filled with blown cellulose insulation made from shredded cardboard. “Cellulose prevents movement of air,” the contractor said, adding that gaskets were put around all electrical outlets to further reduce drafts, “The whole purpose is to ‘build tight and ventilate right.’” To further increase the efficacy of the insulation, all plumbing and duct work has been planned for the interior walls.

Mr. Trolle used Canadian fiberglass insulated windows throughout the building. He said fiberglass has many of the same properties as glass and expands and contracts at the same rate. That reduces the number of air leaks between the frames and the glass.

The exterior of the house was finished with cement-fiber clapboard, a product that promises high durability and maintenance. Exterior columns are of fiberglass, eliminating the problem of rot, and even the stairways leading into the building have been constructed with the environment in mind. Like most stairs, they are constructed with pressure-treated wood, but of a special kind.

“Most pressure-treated wood is treated with chromium and arsenic, which is a giant problem in the making because it can’t be disposed of in landfills,” Mr. Trolle said. “We used wood treated with copper and quaternary, neither of which is hazardous, but which are just as effective.” He said the only additional expense for the wood was having it shipped, as it is not commonly used in this area.

“Bump-outs” throughout the building, small protrusions in the outer wall that can be used for window seats or other purposes, help to give visual variation, to the rooms as well as additional living space. The impression of space is also enhanced by design elements such as that found in the master bedroom, where a large walk-in closet has walls only 6.5 feet high. That leaves a 4.5 foot space above and creates the impression that the room is 18 feet long. The interior proportions of the rooms are modest – the living mom is a mere 12.5 by 12.5 – but Mr. Trolle said design elements help to keep the house from feeling closed in. Because all of the spaces are small, each room occupies a corner of the building and has windows on two walls. The house is oriented to the south, taking advantage of solar heating, and roof overhangs have been designed so that the sun shines into the windows in the winter, when it is low on the horizon, and is shielded in summer, when it is higher in the sky.

All of the floors in the house are maple or some other impermeable substance. “Carpeting is the best place to grow dust mites, Mr. Trolle explained. “It’s not so much the mites that cause problems, but the voluminous amounts, which is very bad for people with respiratory problems. Hard floors are the best way to avoid this problem, so we would encourage people to just put down area rugs for that soft, fluffy feeling. “Area rugs can be taken outside and cleaned, or maybe even thrown in the washing machine.”

The absence of a new house smell alerts the visitor to another important difference in the building: No materials emitting formaldehyde, benzene or other volatile gases have been used. Even the interior wall primer and paints are free of organic compounds.

All of the efforts to make the house airtight and to use environmentally friendly materials would not meet the ultimate goal of supplying good quality air if there were not a first rate ventilation system, according to the builder. He said common building strategies often worsen the situation rather than improving it. “In most houses, you find all of the duct work in the attic,” Mr. Trolle said. “That’s a very bad idea. In the attic, you get problems with moisture, mold and particles of insulation that are picked up and carried into the house.

Because of the way his house is framed, all duct work is in the walls and between the floors. The ducts are sealed with both mastic and tape to keep them from leaking, and a supply and return system runs to each room. “The heating and air-conditioning systems are connected to an energy-recovery ventilation system, which maintains a balance of fresh air, humidity and cooling. It exhausts the stale air, supplying a complete change of air every four hours at low speed, every three hours at high speed.

Because the house is so tight and well insulated, no boiler is used for the hot water used for domestic use or heat. A simple water heater, capable of heating water to 130 degrees – significantly less than in conventional homes – supplies both needs.

The reduced energy expenses associated with such houses have prompted some banks to increase the amount available for loans, Mr. Trolle asserted.

And if heating is less of a problem, so is humidity, the builder said, The ideal range for humidity in a home is 40 to 60 percent, a level maintained by the ventilation system. “Bacteria and mold need either very dry or very wet conditions to grow,’ he said. “If we keep the humidity constant, things don’t grow. And if the house doesn’t get bone-dry in the winter, then our respiratory tracts stay moist, which helps to prevent illness.”

Reprinted with the permission of The Litchfield County Times.