A Personal Journey: Building My Own Passive House (part 11) 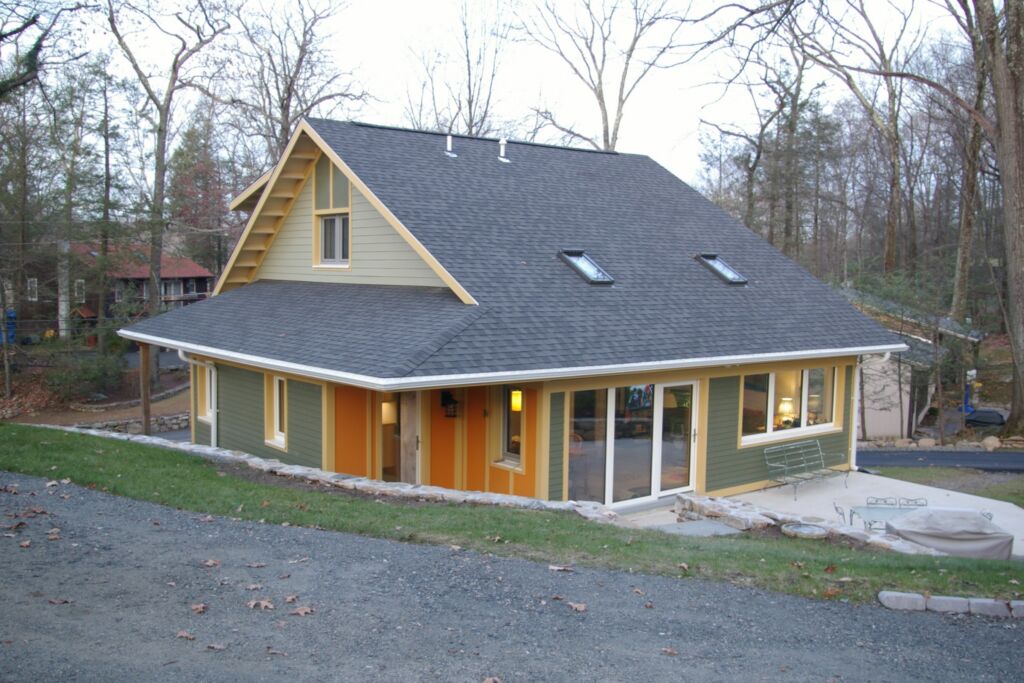 The rear exterior of my Passive House

Those of you who have hung with me through this extended series of blogs now have a pretty good idea about how a highly energy efficient house is put together. You know that it’s not just lots of insulation between the framing members, it’s also a thick layer of continuous insulation, unbroken by framing, as well as a completely airtight thermal envelope. And you can’t get there just by switching out fiberglass batt insulation for spray foam. It requires strict adherence to building science principles for the design and assembly of the foundation, walls, and roof, using numerous structural, insulation, and finish materials. Controlling the flows of air, heat, and moisture may not be rocket science, but it’s close. 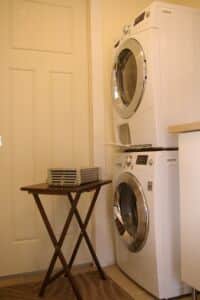 My condensing dryer has no exhaust vent but instead uses a heat exchanger to turn vapor from the clothes into water that is drained. The heat exchanger has been removed and placed on the table.

In order to maintain the air-tight thermal envelope of a Passive House, you want the minimum number of holes, because each hole is a potential source of air leakage. One common hole in most American homes is the dryer vent pipe. A typical clothes dryer is essentially just a big electric hair dryer that heats house air, pulls it through wet clothes in a spinning drum, and then pushes it through a four-inch duct to the outdoors. This works well to dry clothes, but it uses lots of electricity to create hot air, and then wastes that energy when the hot air is expelled outdoors. Moreover, the expelled hot air is replaced by cold outside air (air in always equals air out) which enters the house through the thousands of tiny holes in the thermal envelopes of most homes.

Worst of all, the dryer vent hole in the wall is never air-tight, and large amounts of cold air enter the house whenever the dryer isn’t in operation, which is usually 99% of the time. Depending upon the air pressure at the dryer location in the house, you can often feel cold, outside air as it flows into a house through the dryer vent pipe. You can check yours by feeling for a draft around the door, especially when it’s really cold outside. A backdraft damper could limit this problem. Making the whole assembly airtight would help even more, but exhaust-type dryers will never be the most efficient way to dry your clothes.

My condensing clothes dryer is different. Like a normal dryer, it uses electricity to heat house air and pulls the hot air through wet clothes in a spinning drum. But then, instead of exhausting the hot damp air to the outdoors, it pushes that air through a heat exchanger, which causes the vapor to condense (the water is then drained). The remaining hot and dry air is then returned to the house for space heating purposes. In other words, the energy used to create the hot air that dries the clothes is also used to heat the house through the cold months of the year.

During the summer months, keeping the hot air in the house adds to the cooling load, which requires energy, so it’s counter-productive; but we live in a heating climate, so a condensing clothes dryer saves a lot of energy annually. To avoid the summer energy penalty, an old-fashioned clothesline is a great answer.