A Personal Journey: Building My Own Passive House (part 8)

Let me answer the rhetorical question I asked at the end of part 7 of this series.  Why does the triple glazing (three separate panes of glass) in most European windows and doors (W&D) have much better insulating values than the triple glazing in most American windows?  After all, besides having the same three panes of glass, they both have low-e coatings, argon gas between the panes, and special spacers between the panes to stop heat flow. 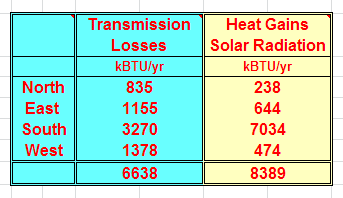 The windows in my house contribute more beneficial heat to the house during the cold months than they lose, especially the south-facing windows.

The reason is that American triple glazing (TG) is about 1” thick and European about 2” thick.  With three panes of 1/8” glass, American TG has two cavities between the panes about 3/8” thick each.  With the same three panes of 1/8” glass, European TG  has the same two cavities between the panes, but each one is more than 3/4” thick.  Because the cavities of both American and European TG are filled with argon or krypton gas, which greatly slows the flow of heat, the thicker cavities with more gas in the European W&D do a much better job of slowing heat loss.

So why aren’t American window companies making W&D with thicker glazing units?  My guess is that they aren’t convinced that Americans are ready to pay the extra cost for them to re-tool their factories and then to make these vastly better products.  The sashes (the part that opens and closes) would have to be thicker as would the frames (which greatly improves the insulating value of the frames!)  That said, for one of our current projects, we priced American triple-glazed windows against European and were shocked to find that the European window quote was actually slightly lower than the American.  Remember how American car manufacturers were forced to improve the mileage of their cars when customer demand for energy-efficient cars exploded? I think the same thing will happen in the window industry.

For my Passive House, I chose between three different triple glazings with slightly different performance values.  For my south-facing windows, I chose glazing with a relatively high 61% solar heat gain coefficient (SHGC), because I wanted the sun’s heat during the cold months – and there’s no summer overheating problem because my roof overhang was designed to fully shade the windows during the summer months.  For my east, west, and south-facing windows, I chose glazing with a lower 49% SHGC because I wanted the slightly better U-value (this is the inverse of R-value, so lower is better.)

The truly fascinating thing is that my windows, in total, supply much more heating energy than they lose on cloudy days and at night.  If you look at the chart, you will see that there is at least some solar gain from windows facing in all four directions of the compass – even north – although there is a net gain only from the south.  My south-facing windows help to heat a heavily insulated concrete slab under tile in my main living space.  This prevents the house from overheating during the day and gently warms the house during the evening and night hours.

In my next post, I’ll provide details about the heating, cooling, and ventilation systems.